It's FINALLY gettin' cold down here in FL. We've got just a few more weeks in this place and then we're packing up and heading to our next duty station...back to good ol' Hampton Roads, VA. After 6 months or so there, we're either stayin' put or packin' up again and heading north to DC!! The latter is more likely, so we'll see how everything pans out.
I'm a bit backlogged on entries. I've been cookin' but not diligent on taking photos or whatever. So, here's a loooooooong recap of what I've been concocting up in this place. 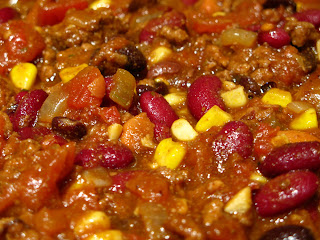 I actually made this when it was still warm over here but getting cooler. Right now would've been PERFECTO to make this bad boy. I also added loads of beans. I'm not one of those chili people who don't like beans in their chili. C'mon...fiber is soooooooo good for you!! Also, I had bottles of Guiness sitting in the pantry (the Hubs and I aren't drinkers) and needed to use it (I had it for another meal we love from our BFFs the Martinos...Beer Beef & Potatoes...mmmmmmm). I threw it in the chili and oooooooooh...that's what it's been missing!! Anyway...I lack measurements when I cook but here's what I put in it: 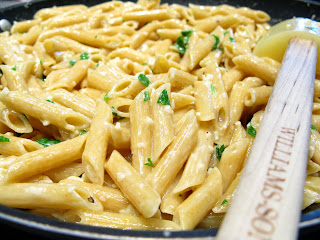 Kathleen is a good friend of my sister, co-worker, and a FOODIE too!! Kim has told me plenty of times how the whole fam are great cooks! So, of course when Kathleen & Kim plugged me into their food emails (during work no less...tsk, tsk, tsk...hahahaha), I had to try one of Kathleen's recipes! Thank goodness I did. This was simple, easy, and YUMMY! THANK YOU, Kathleen!!!

6-8 (good size) cloves of garlic, minced or pressed
2-3 Tbls. olive oil
1/4 cup cream (more if you want it creamier)
lots of parmesan cheese (1/4 cup shredded - ish)
sprinkle of pepper (white pepper if you have it)
a bit of chopped fresh parsley

Sauté the garlic in olive oil . Add the cream and simmer a few minutes until bubbly & well combined. Toss everything with the pasta. 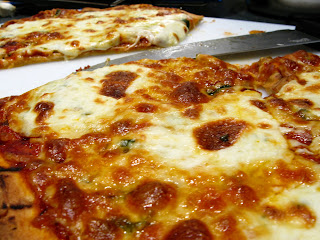 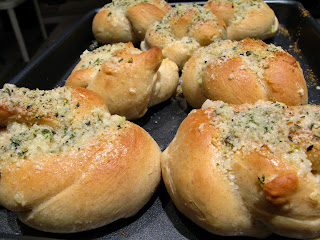 So, I suck...really, really, really ridiculously suck at making bread. Quick breads...no sweat. But put yeast in the ingredients & kneading...you have NO GO with me. The center of the bread is usually wonderful...however, that is after you have miraculously broken through the concrete crust with a combination sledge & jack hammer. Yes, I am THAT bad. So, several years ago I tried Ina Garten's (aka the Barefoot Contessa) recipe for Grilled California Pizzas. I was confident that my girl wouldn't let me down...and she didn't! I had successfully made a yeast bread w/o fail! WOOHOO!!! However, I managed to eek out 5 single pizzas out of this dough not knowing that one single pizza was enough to feed two! OOPS! So, this was the third time I made it and after being inspired by Em's yummy post on garlic knots this past summer...I knew what to do with half of the dough recipe! The photo above of my garlic knots was a bit off...and missing a knot since it was in mah belleh! ;o) But, I think I would've changed the salt content of the dough...too salty for the knots. I think I would've preferred a sweeter dough.

The only other time I was successful with yeast breads were several years ago with Alton Brown's Overnight Cinnamon Rolls and waaaaaaaaaaaaaay back when I was a single-digit age and made a potato cinnamon raisin bread. 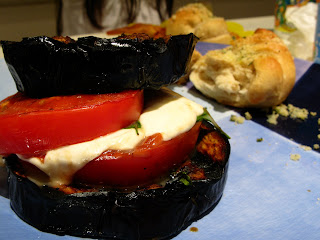 My sister, cousin, and I were scarred from a eggplant experience in our youth. I have since outgrown that experience...but I don't think they have yet. ;o) Let's just say after a month of the same same eggplant dish...we were good for a lifetime.

Anyhoo...Shape Magazine had this Eggplant Caprese recipe in one of their issues way back. It's become a favorite of ours and it's low-cal. Totally satisfying and YUMMY! Sean's my carnivore and this is a satisfying meal for him. It probably helps that I make a 5 lb. salad for the two of us. ;o) The photo above doesn't do the meal justice since A) I almost burnt the eggplant since we were packing up for our drive to DC and B) I almost burnt the eggplant while packing up for our drive to DC. ;o) TRY IT! It's so good!! You can find the recipe here.