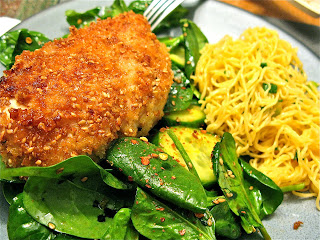 A while back I published a post on buttermilk chicken tenders which were inspired by Tyler Florence's Sesame Chicken Salad with Spinach, Cucumber, and Cilantro. I've used a bunch of Tyler's recipes straight from Food Network...but never bought his book. Why? I dunno...since every recipe I tried was fabulous. I had every one of Ina's but none of Tyler's. So, this Xmas/birthday I received 4 of his books and loving all of them!
I promised Melissa that I would post the recipe. I omitted the red pepper flakes since the kiddos don't tolerate heat so well. Also, I would start with LESS than 1/4 soy sauce and add more to taste...or use less-sodium soy. We served up our's with a side of Momofuku Ginger Scallion

from Tyler Florence (Tyler's Ultimate)
Continue here for the recipe...
Posted by Tanya at 7:23 AM 3 comments: Links to this post

I had long promised my dear friend Dharms that I would pop over to her friend's sister's blog and check it out.  I did but didn't go back for a while...not for any particular reason other than Mommy Brain.  So, when I did check it out...I was so glad I did.

Not only are there a bunch of recipes I'm excited to try...but, I found these bad boys JUST in time for Mom's 60th!  Brie Puffs...frikkin' genius...and oh-so-yummy!! 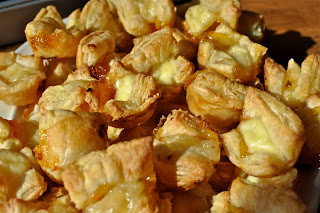 I didn't print out the recipe but Kim & I managed to knock it out really quickly.  These puppies are easy, delicious, and a super fabulous addition to any party!  Our version was just good ol' plain apricot preserves.  I can't wait to try other combos like a berry preserve or other types of yumminess.

Check out the recipe over at Sonal's blog.

Posted by Tanya at 4:16 PM No comments: Links to this post

Apparently I didn't get the memo that my mom's impromptu birthday party wasn't a dessert party.
Nonetheless...in 24 hours I have made for the party:
Cashew Caramel Cookies
Oatmeal Applesauce Cookies
Sugar Cookies
Apple Cherry Crumb Bars
Coconut Cake (for the birthday girl)
Special Dark Chocolate Cake & Semisweet Choco Ganache
Oh, and marinated chicken wings...'cause I guess we don't want the guests going into sugar overload.  ;o)  I'll also be making a kale salad too.  Mmmmmmmmmmm...kale.
But back to the diabetic-coma-inducing menu I'll also be trying out Michelle's Panipopo which are Samoan Coconut Buns.
The best husband ever got me my new camera...so, I'm hoping there will be some pics to post after this weekend!
Posted by Tanya at 11:29 AM 1 comment: Links to this post 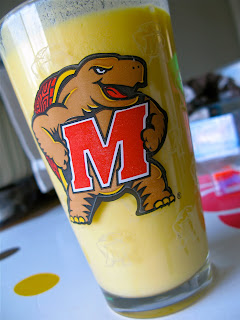 Hello Mango Lassi,
We love you.
Like really, really ridiculously love you.
Seriously.
Love,
Tanya's Kids
Continue here for the recipe...
Posted by Tanya at 6:13 PM 2 comments: Links to this post

whoopie PIES, that is.

Sicko.
Dude...joooooooooking.
Anyhoo...I somehow managed to include my fairly brand-new copy of Martha Stewart's Cupcakes book with my library books and didn't catch the goof until a few weeks later.  Of course, a brand new cupcake book will not stick around long and lo & behold...I had to get a new copy.
So, with the order of my 2nd copy I also had to order a buddy for it...Martha Stewart's Cookies.
Since the hubby is nearing the end of his current sea tour (department head tour), I've made it a goal to bake something everyday for his last week.  Except, his last week was supposed to be last week and here we are.  With that being said, I've taken time off here and there.
Last night, however, peanut butter whoopie pies.  I'm not a fan of chocolate but chocolate and peanut butter has always been a favorite flavor combo of mine.  This recipe is no exception.
Of course I read correctly and saw that I needed to drop the cookie batter in 1.5 TABLESPOONS and not the 1.5 TEASPOONS that I did.  Whoops.  So, I *did not* manage to make almost 4 dozen whoopie pies for my husband to take to the submarine...which were gone apparently 10 minutes after he arrived onboard.
With that being said, it's off to plan what will be his final treat of his final day of being the Weapons Officer on the USS TN.
ENJOY!! 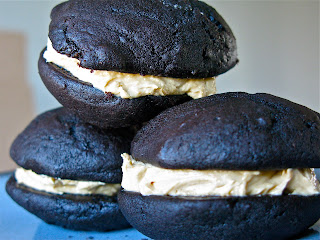 Continue here for the recipe...
Posted by Tanya at 8:10 AM 2 comments: Links to this post