Oh me oh my!!! So, I'm a sucker for good blogs with awesome photos. The Pioneer Woman Cooks is a blog that has me crackin' up and lovin' some good photos! Anyhoo, I had seen her recipe for her most favorite-est salad ever. I wanted to try it, but wasn't going to give it a go without the hubby here to help eat it.
Oh goodness was this bad boy a winner!!! It's a recipe from Jamie Oliver (the Naked Chef to you foodies). It was similar to another noodle salad from another UKer Nigella Lawson. That one, Vietnamese Turkey & Glass Noodle Salad was a favorite of our's too! I prefer Oliver's salad to Lawson's because there is WAAAAAAAAAAAY more veggies in it. Both are uber-good though!

We used our usual Barilla Plus pasta to make the salad...giving us our serving of protein, Omega-3s, & more fiber. But, if you want more protein, some grilled chicken or steak (or pork or seafood) would be PERFECT with it too!


Please try this recipe! It was soooooo fabulous! And you won't feel guilty horking down a ginormous bowl/plate of it! Unless you eat several pieces of garlic bread with it...MAYBE like we MIGHT have done last night. ;o) We don't play with garlic bread in this house...fresh minced garlic, butter, & olive oil...mmmmmmmmmmmm. The kids could eat an entire loaf if we let them. Anyway...TRY THIS DISH!!!
Posted by Tanya at 9:03 AM 1 comment: Links to this post 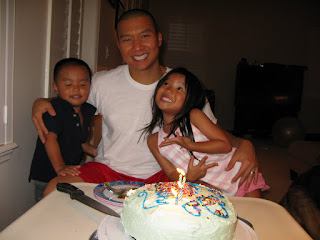 Yes, the hubby finally came home...early & on his birthday no less!!! We rounded up a pretty darn fine meal...if I must say so myself! ;o) The meal made up for, I hope, the lack of cleaning I intended to do for his birthday gift. Hahahaha. One day we will have a clean house. Usually it's when we get stationed somewhere else. HAHAHAHAHA.

Anyhoo...here's the menu we had planned for LT Muscles:

Dessert
Special Dark Chocolate Cake w/Peppermint Buttercream Frosting
Now, who the heck is Gung-gung? Well, he is my 98-year old maternal grandfather who, up until his debilitating stroke about 12 years ago, was an amazing cook! He studied the chefs in Hong Kong and cooking really was his passion. Not only could he cook, but the man could bake too!! Goodness!! Anyway, as this blog continues, I'll probably continue to post recipes from my grandfather that were passed on to my mom who is now teaching us. This way, my kids (and cousins/family) can have something of my grandfathers to always hold on to. Anyway, he is an amazing, amazing man who, long story short, was an orphan when he was still a single-digit age, immigrated to Mexico, then to Honduras, married my amazing grandmother (Lord, Lord, Lord is this woman amazing), raised nine children, owned & ran a store in Honduras, immigrated w/the whole fam to Miami, and just is plain awesome. Now...take an orphan in China (at 6, I believe and raised by his older sisters until his teens) who moves to Mexico & Honduras...has to learn another language, starts business & family, takes care of a slew of extended family back in China, moves to the US, learns another language, and takes care of everyone still. My grandmother...well, she's definitely another paragraph and I will save that for her 5-Spice Garlic Pork...mmmmmmmmmm. My paternal grandparents are equally as amazing too!! But, since this is a food blog, I digress.
My grandfather's cabbage salad is simple: thinly shredded cabbage, thinly sliced tomatoes, olive oil, oregano, salt, & lime. Simply. Here are the steps though...;o)
After slicing up the cabbage, toss it with salt (a good amount) in a colander & let it sit for a good 15-30 minutes. Then rinsed that bad boy. Toss it in with lime juice, olive oil, & good amount of oregano. Toss in the tomatoes. My mom used to top it with chopped fried bacon...and that was GOOD! I haven't made it like that in years though. But, just FYI. 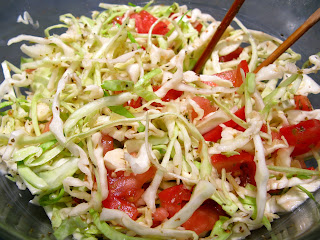 For the churrasco I used flank steak. Traditionally, skirt steak is used. Flank is one of the leanest cuts of meat with barely any fat, so we cook/grill a lot with it. I say "we" but mean me. Hahaha. Anyhoo, I marinated the flank in my cousin Luis' chimichurri recipe. I let that bad boy marinate for a good 6 hours in the fridge. I typically like to marinate my meat for a looooong time.
Here's Luis' recipe w/my tweaks in red:
Luis' Chimichurri
1 cup stemmed parsley (I use more)
1 cup stemmed cilantro (I used the whole shabang since there's tons o' flavor in the stem too...I also use more than 1 cup)
6 cloves of garlic, chopped (only if you're weak do you use 6 cloves...I use MORE...mu-hahahaha)
1 cup extra virgin olive oil
1 1/3 cup white vinegar (Luis uses more)
1 1/3 cup water (you can completely omit this or use less for a thicker consistency)
1.5 tsp. salt (Luis also uses more on this one)
1/2 tsp. black pepper
1/2 tsp. red pepper flakes 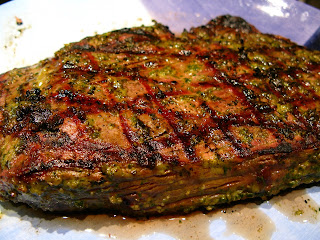 What I've started doing lately...even though it is completely anti-green is marinating my meat in Ziploc bags. I use less marinade and it completely surrounds my meat with goodness. This way, with the chimichurri, I have leftover sauce to drizzle on top of the meat. YUM! The photo below is Sean's birthday meal. The pic is deceiving since 1/2 of the plate were veggies and the rice was flattened out to look like there was more. 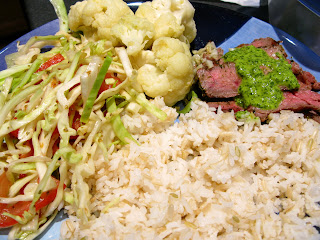 Now, the cake. When I first started becoming addicted to, errrr, reading The Repressed Pastry Chef's blog, I was reading about her mint chocolate cupcakes. I mean, really, after being greeted with that photo, how could you not be sucked in??? Plus, I *heart* mint chocolate. So, I used my usual chocolate cake recipe (I love you, Ina Garten!) and my usual buttercream recipe (you're my hero, Em!). Add less vanilla & WAY more peppermint to the buttercream...along with blue & green food coloring, and I was GOOD to go. Sean normally doesn't eat frosting but devoured the whole slice of cake with a huge icy glass of milk. This was RIGHT AFTER two plates of the above meal (of course his had way more meat & rice). Yup. It was that good. My kids helped decorate it. You'll be quick to notice my 3YO son's decorating skills in the center of the cake. ;o) 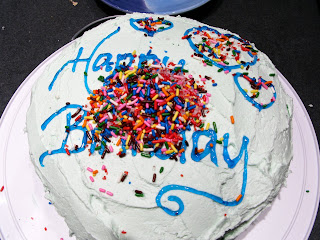 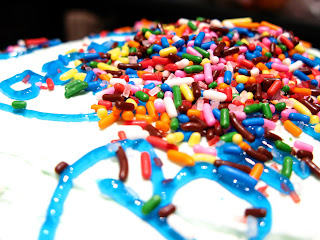 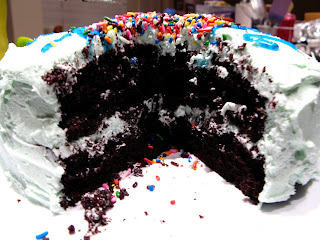 Now, our family loves ourselves some pesto. Jaron just loves pasta...period...and rice. That boy is all about his carbs. Anyhoo, we love basil too...love it, love it, love it. Almost as much as garlic. But, garlic reigns supreme in this household and I doubt any other ingredient could usurp it.

I happened to be reading one of my favorite magazines (Women's Health) and was intrigued by the chef's challenge on making a low-cal pesto. I decided to try it one day and have never looked back ever since. Shoot, I don't even think I've made my regular pesto since discovering this one. The tomato-based sauce got me wondering how it compete with the traditional basil-garlic-parm-pine nut pesto, but boy o' boy was this one a winner!!

I typically use Barilla Plus pasta for everything...except linguine w/clam sauce. The main reason is because Barilla Plus does not come in the linguine shape...booooooooooooo. Anyhoo...this bad boy doesn't have the fiber-y consistency of whole wheat pasta and is loaded with fiber, protein, and Omega-3s...what's NOT to love about it?? It tastes FABULOUS!! Plus, I can feel like I'm giving the kiddies a more well-rounded meal when using it.
Anyhoo...on to the recipe! You can also find the original at this link.

Penne with Pesto alla Trapanese
Lidia Bastianich, the host of Lidia's Italy, creates a delicious dish with under 500 calories, 20 grams of fat, and 650 milligrams of sodium

1. Cook pasta according to package instructions until al dente.
2. While pasta cooks, rinse the tomatoes and basil and pat dry. Cut tomatoes into large chunks.
3. Place the tomatoes in a blender or food processor, followed by the basil, almonds, garlic, red pepper flakes, and salt. Blend for a minute or more to a fine purée; scrape down the bowl and blend again if any large pieces are left.
4. With the machine still running, add the olive oil in a steady stream; it will emulsify the purée into a thick pesto.
5. Scrape the pesto into a big bowl. Drop drained pasta onto the pesto. Toss quickly to coat the pasta, sprinkle on cheese, and toss again. Serve immediately in bowls. 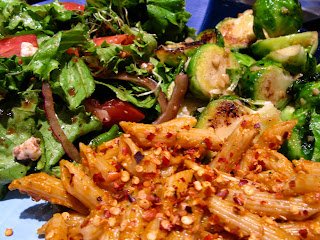 Posted by Tanya at 5:38 PM 2 comments: Links to this post