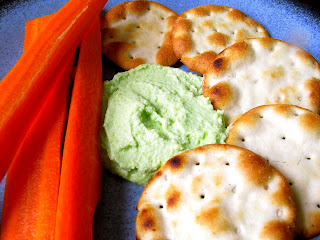 We finally have a Trader Joe's in the area and it opened up last Friday. Unfortunately, I missed the grand opening since I was in the SUV with my hubby & 4 kids (2 human & 2 canine) speeding up I-95, trying desperately to NOT MISS the birth of my sister's (Kim) first child, "our baby" (as she is affectionately known in our own little pod) Talia's grand entrance.
Did I make it? You bet I did! With an hour to spare before pushing, my hubby dropped me off at the hospital and took the kiddies home to grandma (who was already at the hospital). Our baby came in an hour and a half later and we couldn't be more thrilled!!! She is GORGEOUS and a GOOOOOOOOOOOOOD baby!!! We're missing her already.
Anyhoo...Jaron and I went to TJ's today, only to find they didn't have Sean's uber-fave edamame hummus (introduced to us by our lovely Kim). So, in honor of my awesome hubby who got off the sub and drove us up to DC in the nick of time...homemade edamame hummus. Which, I dare say, might be better than TJs and definitely healthier!
Tan's Edamame Hummus
1 cup shelled edamame (I used TJ's shelled edamame which yields an oz. more than a cup)
1/2 cup silken tofu
1/4 cup lemon juice, plus more for taste
1 large garlic clove
1/4 cup extra virgin olive oil, or more till desired consistency
Salt, to taste
Optional ingredients: cumin, cilantro, parsley, white pepper, curry powder, roasted red pepper, basil, etc.
Place all ingredients in a blender or food processor except salt (I used a Vita-mix). Taste and add salt to desired taste. Add more lemon juice or olive oil, if needed.
Serve with crudite, pita crackers, or whatever...but ENJOY!!!
Posted by Tanya at 9:33 AM 3 comments: Links to this post 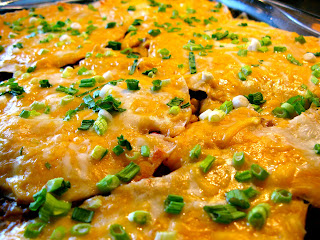 Tacos were always a family favorite of our's growing up. However, prepping for tacos takes some time and that's something I don't always have. So, last night I threw together my quick version of a non-taco-taco....and came up with my taco lasagna. Obviously, it's not a new dish...I first tasted it when we babysat some kids waaaay back when. This was just a easy, fun, & tasty way to have our tacos & put some veggies in our kids.

Even though I'm all about things from scratch...when it comes to taco seasoning, I ALWAYS use El Paso Taco Seasoning...it's just that good.

Besides this being an uber-easy meal to throw together, I had the pleasure of looking out my kitchen window and seeing these in my backyard: 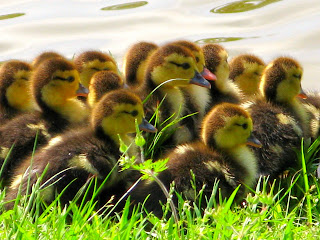 Tan's Taco Lasagna
Ground meat (I use a combo of turkey & lean beef)
1 medium or large onion, chopped
4-6 cloves of garlic, chopped (more or less depending on your garlic preference)
2 cans of beans, your preference (I used black & dk. red kidneys), drained and rinse
1 can diced tomatoes, drained
1-1½ cups frozen corn
1 packet taco seasoning, preferably El Paso
1 T. Adobo seasoning
1 can green chiles
1 can sliced black olives
Green Onions, chopped
Corn tortillas
Shredded cheese (I used sharp cheddar & Sargento's reduced fat Mexican cheese blend)
Olive oil
Toppings: Pico de gallo, sour cream (or if you're in our house, plain yogurt), green onions, chopped jalapeno peppers, chopped cilantro, Tabasco sauce, etc.
*note: I didn't use these ingredients, but they would be mighty tasty in the dish
1. Brown the meat in a large pan (if using a nonstick pan, use a bit of olive oil) & season with pepper (not salt since the taco & adobo seasonings are salty enough). When meat is almost completely brown, add about 1 T. of olive oil and onions. Saute until onions are translucent. Add adobo seasoning & garlic. Add packet of taco seasoning and water (the amount called for on the packet). Throw in beans. Let cook until liquid has reduced. Add tomatoes (and chiles and olives if using) and cook until liquid has pretty much cooked away. Turn off heat and throw in corn.

4. Tent with foil by folding a piece of foil in half, then opening it up and placing it over the dish...thereby having the foil not touch any part of the lasagna but still is protecting the cheese from burning during the cooking process.

5. Bake for about 30-40 minutes. Remove foil and add chopped scallions and bake for another 10 minutes or place under broiler until cheese is nice and bubbly.
6. Serve with assorted toppings or eat it plain...and ENJOY!! 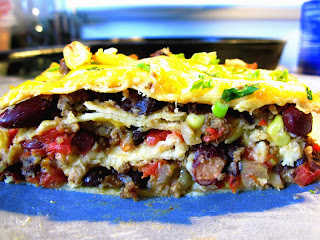 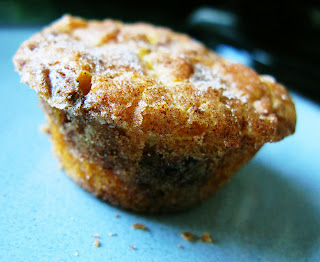 While checking out the newest posts on my fave food blogs, Em (aka The Repressed Pastry Chef) had posted about these snickerdoodle muffins. She pretty much had me at "snickerdoodle". The original recipe is from Culinary Concoctions by Peabody. How can you resist the cinnamony goodness of snickerdoodles...let alone in cake form???
I tried it and our family fell in L-O-V-E...or "lurve" if you're Celine Dion. I kicked up the cinnamon & vanilla (of course). I only added cinnamon to the batter on the second try since initially I wanted to see how it would taste with no cinnamon in the batter...which was tough for me since we're cinnamonaholics. Definitely delish with or without cinnamon in the batter. The original recipe was very buttery and crazy moist. I wanted to try to trim down the butter and cut out half a stick on the second try. It still was very moist, but did not stay as moist as long as the original recipe's results had. I also didn't have sour cream and used yogurt. So, below is, I guess, my lower-fat/cal recipe for these delicious & addictive muffins. Try the original or mine...either way...TRY IT!!
Anyhoo...thank you Em for posting this recipe...my own muffin top thanks you...it's back to elasticized pants for me.

Snickerdoodle Muffins
adapted from Culinary Concoctions by Peabody
1½ sticks unsalted butter
1 cup sugar
3 T. vanilla
2 eggs
¾ t. baking soda
¾ t. baking powder
¾ t. cream of tarter
¾ t. freshly grated nutmeg
½ t. cinnamon
1 and ¼ cup plain yogurt
2 and ¼ cups all purpose flour
1 cup sugar and 3 TBSP cinnamon mixed together for rolling
1.Cream the butter and sugar until soft about 3 to 5 minutes. Add in the vanilla. Add in the eggs one at a time and mix until each is incorporated.
2.In a separate, mix together the flour, baking soda, and baking powder and cream of tarter.
3.Add the flour mixture and the yogurt alternately to the egg-butter mixture in the additions. Start with the flour and end with the flour (ie. flour, mix, yogurt, mix, flour, mix). Scrape the bowl occasionally.
4. Using an ice cream scoop, scoop out muffin batter one at a time and drop into a shallow bowl filled with the cinnamon sugar mixture. Roll the muffin around in the mixture until it is covered completely in cinnamon sugar. Place muffin into a greased muffin tin.. Depending on the size of your tins, you should get about 12 to 18 muffins.
Bake them for approx. 20-22 minutes in a 350°F oven or until they are golden brown. 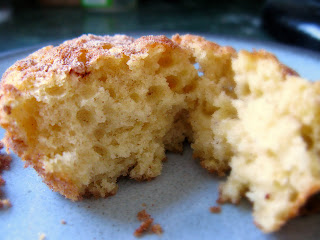